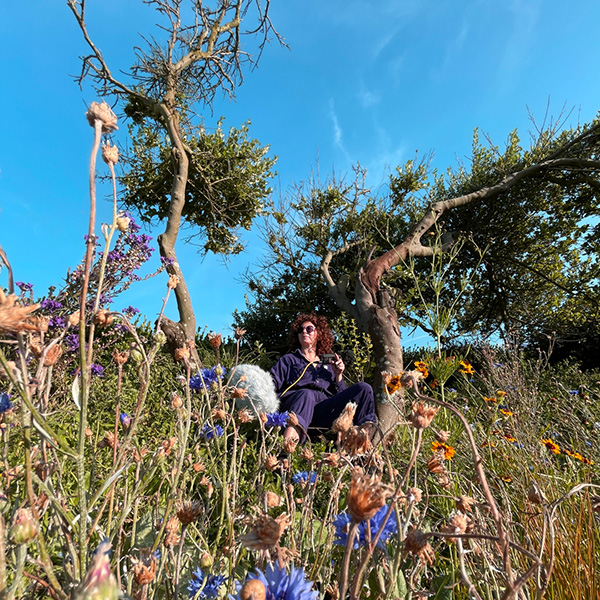 Using a multitude of experimental phonography techniques including contact microphones, the artist and composer has collected sounds from the surrounding environment, flowers and foliage. Visiting the Sunken Garden on several occasions with varying weather conditions and at different intervals during the day and night, Francesca has intended to capture the contrast between the wind swept and desolate harshness of the garden as well as its safety and serenity. She has created a simple, rich and sonically immersive piece which interprets the sounds of the Sunken Garden through improvisation, electronic processing, reflection and repetition and with melodic and textural responses through her cello. Francesca is influenced by the sonic textures of Margate and the beauty found in unexpected places. She takes inspiration from Music Concrète and long-form experimental compositional styles, her style is raw, melodic, explorative and playful. Bough Talk can be encountered in four parts located in different sections of the garden, at different times of the day.

Francesca is a cellist and producer specialising in Klezmer and improvisation. She works with live electronics, composes music for video games and documentaries, collaborates with groundbreaking artists such as Imogen Heap and Talvin Singh MBE, and is one half of the critically acclaimed duo Fran & Flora. She is co-director of the Cliftonville Cultural Space; a new multi-arts space in Margate (previously Margate Synagogue) and hosts monthly radio show on Margate Radio. Francesca is currently living in Boston, studying on the Graduate Contemporary Improvisation programme at the New England Conservatory.

‘Ter-Bergs vocals have a cool charm [whilst her] cello passionately laments.’ – Clive Bell, The Wire.

Francesca is a cellist and producer with an in-depth improvisation and collaborative practice. She is known for her specialism in Eastern European traditional music (specifically Klezmer and Roma) which she has been studying in-depth for over 10 years. Her improvisation practice stems from studying with renowned improvisors in the US and UK—including Vijay Iyer, Okkyung Lee and Ashley Paul. Since graduating from Goldsmiths University of London with a Masters in Popular Music, she has explored working with live electronics, studio composition and writing music for film, documentaries and video games.

Francesca is one half of critically acclaimed duo project, Fran & Flora, alongside violinist Flora Curzon—with whom she has recorded and performed extensively across the UK, Europe and North America. Their debut album, Unfurl (2019) was BBC Radio 3 Music Planet’s ‘Album Of The Year’ and they appeared live on BBC Radio 4’s Woman’s Hour and Cerys Matthews 6Music show. Beyond Fran & Flora, Francesca has collaborated with groundbreaking and genre-defying UK and international artists, including Hejira, Imogen Heap, Talvin Singh, Frank London, Denai Moore, Riz Ahmed and Portico Quartet.

Having developed a passion for collecting found sound and scoring works for film, documentaries and video games, Francesca has composed the music for the Turner Contemporary’s digital commission, an interactive virtual game created by Umut Gunduz & Anna Skutley, and was commissioned but the JW3 & BFI to create an original score for a series of archival shorts about Jewish Life in Britain which premiered at the UK Jewish Film Festival (2019). Her debut EP In Eynem is being released on 16th April 2021 on Phantom Limb’s ‘Spirituals’ imprint.

She has recently become the co-director of the Cliftonville Cultural Space; a new multi-arts space in Margate. Previously the Margate Synagogue, Francesca and a team of local artists and activists saved the building from sale to property developers.

Francesca hosts a monthly radio show on Margate Radio called Freeness, and is a regular guest on other independent stations including NTS and Giles Petersons’ Worldwide FM.