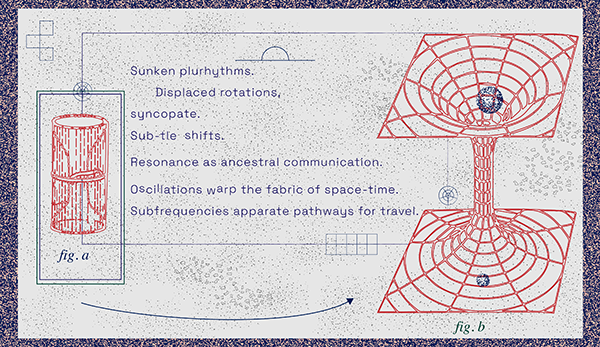 Ongoing speculation informs that the Sunken Garden conceals at its core the ruins of an ancient star observatory. Within its foundation lies structured stone formations of unknown origin, recognised to have accurately charted the orbits of the stars and constellations. As Earth rotates through denser and more energetic regions of the wider heliosphere, it is also told that the Sunken Garden’s current position in relation to the sun beckons a renewed influx of interplanetary energy affecting the fabric of a since dormant celestial gate. Through this celestial gate the Sunken Garden has previously provided an entry point through to other earthbound space-time loci as well as neighbouring celestial systems. Expanding on an ongoing sonic cosmology, ‘Sun Dial’ is a sonic meditation considering the Sunken Garden’s history as a long forgotten astronomical site.

Sun Dial is presented here as a two part call and response as an acknowledgement of the Mekan people who once used call and response to weaken further the interplanetary fabric. It is told they called upon their ancestors through sound during a time of great upheaval and a pathway was created for their safety. That pathway opened up here, the Sunken Garden. Part A imagines the call, Part B the moment of opening and journeying through. Marooned temporally, it is believed they continue to travel in this way.*

*The sounds included here are, more generally, inspired by the Sunken Garden. From the plant cycles, to the salt winds and those sub booms heard, and felt, periodically from the distance.

Shamica Ruddock is a research-based artist working often between sound, text and moving image. Shamica’s current practice considers the ways in which Black diasporas are engaged and explored through sound. Meditating on a textuality of Sound Culture, Shamica is particularly interested in how sound becomes a form of narrativising often with its own system of signifiers.

Shamica Ruddock is a research-based artist working often between sound, text and moving image. Their current practice considers the ways in which Black diasporas are engaged and explored through sound. Meditating on a semiotics of Sound Culture, Shamica is particularly interested in how sound becomes a form of narrativising often with its own unified system of signifiers. Considering ideas around temporality, traces, echoes, abstraction and returns; the Hauntological idiosyncrasies of Dub provide an underlying methodology shaping processes of making for the artist, whilst simultaneously forming apt descriptors of Black being in the wake of enslavement. Louis Chude Sokei’s exposition on Black Technopoetics mapping dynamics of race, technology and music, hybridity and creolisation, has also provided a core research anchor and departure point.

Shamica is currently an Eccles Centre Visiting Fellow researching early Maroon societies in Jamaica and across ‘The Guianas’. Other sites of consideration include African-Caribbean masquerade, orality and folk storytelling traditions. Shamica is a member of Beats Kitchen, Black Obsidian Sound System, Narration Group and Hard Food: A Caribbean Food Theory and Politics Research Group. She has done residencies with CRATE Margate in collaboration with Durham Gallery Ontario, and Languid Hands in collaboration with the Black Cultural Archives. Shamica was also a New Contemporaries 2020 selected artist.