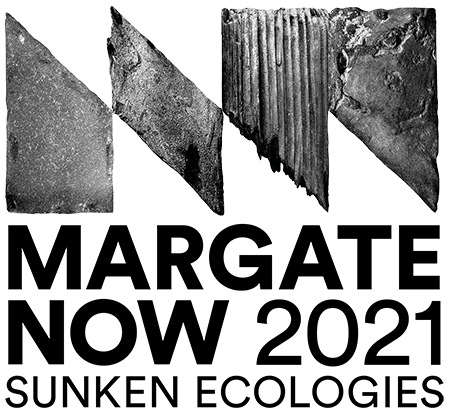 FREE ADMISSION, NO BOOKING REQUIRED FOR THE EXHIBITIONS. BOOKING IS RECOMMENDED FOR THE EVENTS, PLEASE CHECK INDIVIDUAL EVENTS FOR DETAILS.

The 2021 edition of Margate NOW, ‘Sunken Ecologies’, takes on the human-made natural environment and the possible role, participation and responsibility of cultural practitioners in caring for, engaging with, reclaiming or reimagining green spaces.

Guest curated by Anna Colin, the festival primarily takes place at the Sunken Garden in Westbrook, Margate. The garden was landscaped in the early 1930s on the site of a former chalk quarry, and has been under the care of the Sunken Garden Society since 2018. The Sunken Garden is actively engaged with wildlife conservation and was a recipient of the 2020 Bees Needs Champions Award.

For ‘Sunken Ecologies’, the garden has been variously treated as a site of investigation – whether botanical, social or speculative; a space to learn, experiment and grow from – through planting, and arts and crafts workshops; and, last but not least, a site for the presentation of artworks. These range from permanent, functional sculptures serving the needs of the Sunken Garden, to ephemeral or immaterial contributions, such as sculptural landscape interventions, walks, texts and sounds. Other artworks including films and installations are presented in Margate NOW’s hub at Nayland Rock Hotel. In addition, live music, talks, performances, screenings and workshops are taking place during each of the three weekends of the festival.

‘Sunken Ecologies’ embraces topics that are dear to environmentally-engaged cultural practitioners, individuals and communities. From growing, nurturing and extracting transferable learnings from the natural environment, to questioning physical and cultural access to nature, the artists and partner organisations taking part in ‘Sunken Ecologies’ approach environmental themes and practices through documentation, investigation, speculation and acts of repair.

Margate NOW 2021 is only made possible thanks to public funding from the National Lottery through Arts Council England, Kent County Council, Turner Contemporary and support from Interreg Experience, Visit Kent, Dreamland and The Sunken Garden Society.